Unlike the 5th Edition Sword Coast Adventurer’s Guide, these books cover a much larger area. From the Sea of Moving Ice (and Icewind Dale) in the north-west, to Calimshan in the south-west. Sossal in the north-east, to the Eastern Shaar in the south-east.

“On my word as a sage nothing within these pages is false, but not all of it may prove to be true.” —Elminster of Shadowdale

Cyclopedia of the Realms

The Cyclopedia of the Realms is more the “Player’s Guide” to the Realms and provides details on these regions. It also provides information on the races, languages and deities of the Realms. The latter are more than adequately covered in Sword Coast Adventurer’s Guide but the additional regional information is more than welcome. Some regions are given more detail than other and, in some cases, it is almost threadbare. Moonsea, for example, is limited to a couple of paragraphs whereas Myth Drannor gets just over half a page of text and two half page maps. 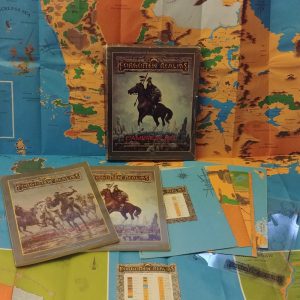 Some of this information though is dated. The, then current, campaign year was 1357 DR (compared to 1491 DR for 5th Edition). However, it still provides a wonderful insight into the regions.

DM’s Sourcebook of the Realms

The DM’s Sourcebook of the Realms won’t be as useful. Roughly half of the 96 pages provide details of NPCs in the Realms and details on “current” events. The second half though is potentially of more use. There are a couple of adventures, with some useful maps, that could easily be dropped into a 5th Edition game. Finally, a third of the book details major magical tomes of the Realms. Some of these tomes contain new spells that could be converted/incorporated into your game (or have them swapped for other spells). The hard work has already been completed for at least one spell: Agannazar’s Scorcher appears as Aganazzar’s Scorcher in Princes of the Apocolypse (and the free Elemental Evil Player’s Companion).

So, is it a worthwhile purchase? I’d  have to say yes. It’s not cheap though if you’re looking for the physical box/books. Thankfully, Wizards of the Coast have released the PDF over at the DM’s Guild for a very reasonable $9.99.