When I run games at home, I have the advantage of not having to worry about what I bring to the gaming table in terms of my DM kit. After all, if I forget something I just pop over to my gaming shelves and pick it up. Running games at conventions (and my now regular game for my work colleagues) is a different kettle of fish though. Over the years I’ve tried many different setups for my travelling DM kit with a view to streamlining it. It’s a tough compromise though. You need everything at your fingertips, but don’t want to break your back getting it to the table.

Recently I think I’ve managed to get a nearly perfect setup:

Screens can be a polarising aspect. Some believe they act as a barrier while others feel they can be an excellent tool. Personally, I like a good DM screen.  I own all of the official 5th Edition screens from Gale Force 9 (so that means I even like a bad DM screen!) but the problem with a lot of professionally produced screens is that they don’t contain the information I want immediately to hand.

I’ve attempted a number of homemade screens using the Savage Worlds Customizable GM Screen but that’s a little too big for my travelling kit so I’ve gone with the mini TWGS (The World’s Greatest Screen) from Hammerdog Games. It has twelve 4″ x 6″ pockets (six for the players and six for the DM) which means there’s plenty of space for information. And, because it’s only 6″ high, it doesn’t act as too much of a barrier with the players. I’ve gone with classic Forgotten Realms art for the player side and useful tables for my side. The tables that have been deliberately omitted are the list of conditions but, for those, I use my own Condition Cards.

I used to cart around my Surface Pro and, while it’s a brilliant tablet, it’s a little too much for what I need at the table. When I last upgraded my phone (more on that later), the package came “free” with a Samsung Galaxy Tab A. Basically, a 10″ Android tablet. I’ve combined this with an old Logitech bluetooth keyboard I had lying around and found a perfect, cheap, travelling computer for my DM kit.

From this, I run DnD5e.info (obviously) and Improved Initiative. Having the core rules on one tablet, as opposed to a number of books makes things a lot lighter. That said, there are times when one of the players may need to look something up. Especially my work group as none of them played Dungeons & Dragons before so don’t have any of the rules. For those occasions, I’ve put the freely available Basic Rules PDFs together into a digest book. The font is a little on the small side but it’s a reasonable compromise.

Do you remember I mentioned I upgraded my phone recently? Basically it was because the sim tray on my old one broke and it was beyond economical repair. A phone that you can’t make calls on isn’t much use. However, the phone itself is still a good little device. Certainly good enough to act as the player side of the Improved Initiative website. I can also use it to show the players images as required.

I tend to run games using “Theatre of the Mind” but there are times when a sketch of the area comes in handy. For this I use a Noteboard. This is a great product which is a portable, foldable whiteboard. It’s gridded on one side and blank on the other. Perfect for those times when you need a little extra. Obviously, for a travelling kit having specific miniatures for each encounter is out of the question. So, I use pieces from an old chess set. 16 pawns to be precise. Small enough to fit into a pencil case but large enough to be a good representation.

I’ve been a fan of the gaming products that Fil and Paul at All Rolled Up sell since they first started. I own three full-size All Rolled Ups (ARUs) and also a Tiny ARU. It’s the tiny one that I use as part of my travelling DM kit. I’ve filled it with 4 sets of mini dice along with similarly sized pens and pencils. Of course, with dice that size, it’s far too easy for them to go missing, so I’ve also invested in one of their foldable dice trays. That way I always know where my dice are.

The best DM accessory ever. Or so a lot of people will attest. Personally, I normally use a small notepad but I spotted this set of index cards in a mini ringbinder at a local budget store and thought “why not?”

I’ve been to enough convention games to know that there’s always one or two people who forget the essentials, so I always carry spare pencils, erasers and a couple of sets of dice in the same pencil case that holds my chess pawns.

One final item I should mention and that’s my Plinth. This is the stand you can see holding up the phone in the first and last pictures. It was a Kickstarter campaign I backed a while ago and is now available on Amazon (and through the designer’s own website) and it’s perfect not only as a phone stand but also for tablets and books. I like it so much, we have four with one always in my bag.

What do you think? Do you have any suggestions for replacements or additions? Maybe there’s something I’ve included that you wouldn’t. Let me know in the comments below. 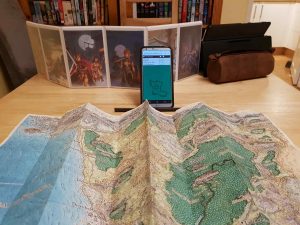 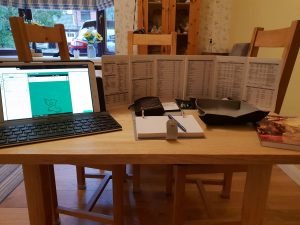 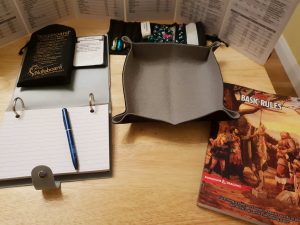 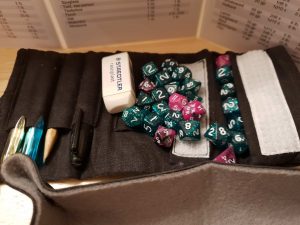 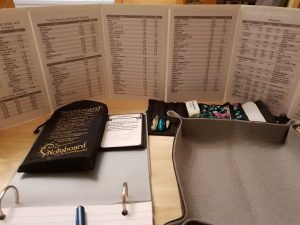